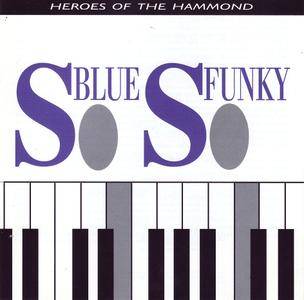 Blue Note's So Blue, So Funky, Vol. 1 is a 12-track compilation that highlights the funkiest soul-jazz organists that recorded for the label, whether it was a leader or as a sideman. Although there's a handful of cuts from the early '60s, such as "Face to Face" by the terrific, underrated Baby Face Willette, the compilation leans toward the funky fusions of the late '60s, such as Big John Patton's "Fat Judy," Lou Donaldson's "Everything I Do Is Gon' Be Funky (From Now On)," Jack McDuff's "Butter for Yo' Popcorn" and Grant Green's "Ain't It Funky Now." The best thing about this comp is that even though it has familiar names, not all of the material is readily available on CD, which makes it of interest to casual groove fans and serious collectors alike.