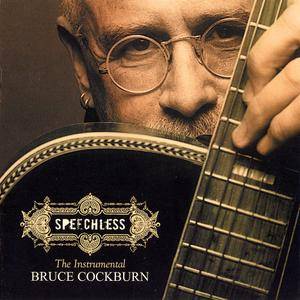 Speechless, Bruce Cockburn's first foray into completely instrumental territory, is proof in the pudding that you can teach an old dog new tricks. There are 15 tracks here, the vast majority of which are redos of tracks from Cockburn's catalog. But given their treatment – many of them done as solo guitar pieces – the dearth of new material doesn't even matter. In fact, one could venture to say that these feel like altogether new pieces. Cockburn is a master guitarist; he often interweaves jazz, blues, country, and folk styles into his cross-genre songs. Here he shines, pure and simple. "Train in the Rain" (anyone notice how many of his songs are about trains and travel?) touches on Leo Kottke and Peter Lang; "Water into Wine" utilizes flamenco stylings while crossing into Gypsy jazz chords à la Charlie Byrd. A new work, "Elegy," kisses the modalities of "Greensleeves" while creating itself as a piece that evokes both absence and memory. "Rouler Sa Bosse" from Salt, Sun and Time juxtaposes Cockburn's six-string against Jack Zaza's clarinet, and becomes a straight-up gently swinging jazz tune. 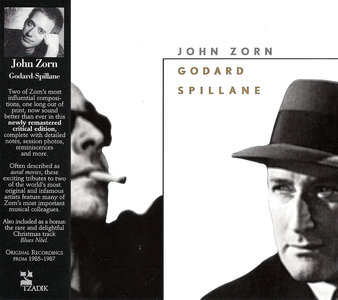 Godard/Spillane is a compilation album by American composer and saxophonist/multi-instrumentalist John Zorn consisting of music created through Zorn's file-card compositional process. He first released the composition "Godard", a tribute to French film-maker Jean-Luc Godard whose jump-cut technique inspired Zorn's compositional approach, on the French tribute album The Godard Fans: Godard Ca Vous Chante? in 1986, "Spillane was first released on Zorn's Nonesuch Records album Spillane in 1987 and "Blues Noel" was first released on the compilation album Joyeux Noel - Merry Christmas Everybody! on the French Nato label in 1987.