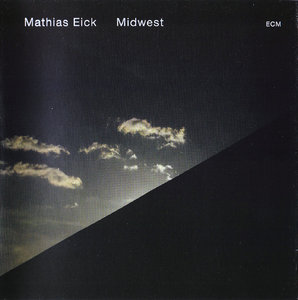 Norwegian trumpeter Mathias Eick opts for a different approach on Midwest. Four years after the song-like Skala, his sophomore ECM date that has attained "classic" status in European critical circles, he employs notions of history, folk tradition, and dislocation. This album was inspired by Eick's time spent playing the American continent; his tour began on the West Coast. When he entered the rural, upper Midwest and encountered its vast open spaces, he began to feel a sense of "home." He later learned that over the past two centuries of immigration, over a million Norwegians had settled there. After conceiving a "road" album that would begin in Hem, the village of his birth, and traverse the ocean to America, Eick enlisted violinist Gjermund Larsen (a folk musician who has contributed to Christian Wallumrød's ECM recordings), pianist Jon Balke, double bassist Mats Eilertsen, and percussionist Helge Norbakken. The compositions are all lyrical, in typical Eick fashion, but with Larsen they take on a rougher, more earthen quality.