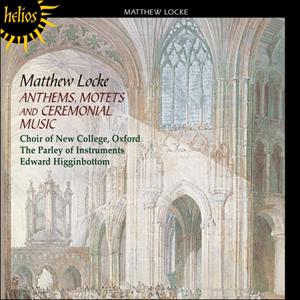 Matthew Locke, England's leading composer in the 17th century, was also one of the busiest, writing for court, theater, and church. Surprisingly little of his music has been recorded, but this excellent recording helps correct this. The music has a strong emotional character, with dramatic, often pictorial harmonic effects that are less favored by today's choirs, but the quality of these works only makes us wonder why Locke is not better known. 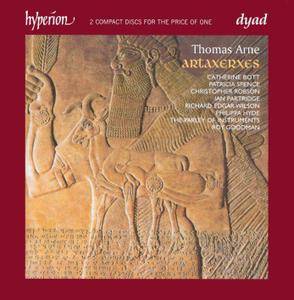 Artaxerxes, premiered in London in 1762, was the first full-length opera seria sung in English. It proved a great success and helped to revive the fortunes of Thomas Arne, whose career had been in the doldrums. The opera featured his new protégée and mistress Charlotte Brent in the role of Mandane and Arne lavished attention on her music. Mandane’s arias and those of the hero Arbaces provide many of the opera’s high points, with their rich orchestrations, virtuoso vocal parts and captivating tunes. Though based on the Handelian model, Artaxerxes shows both Arne’s talent at the later galant style and his penchant for folk-like, pastoral airs. The results are mostly a delight (if a tad lightweight for the libretto’s blood ’n’ thunder deeds), with a variety of attractive arias further enhanced by Arne’s deft use of woodwind. Christopher Robson in the title role and Catherine Bott, thrilling as Mandane, head a fine team of singers: my only complaint is that Patricia Spence’s forceful Arbaces too often slips into shrill and strident mode.

The Parley of Instruments, Mark Caudle - The Noble Bass Viol: From Purcell To Handel (1999) 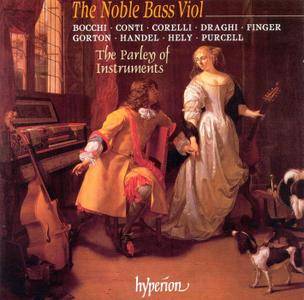 The Parley of Instruments, Mark Caudle - The Noble Bass Viol (1999)
Purcell, Bocchi, Conti, Corelli, Draghi, Finger, Gorton, Hely, Handel
EAC | FLAC | Image (Cue&Log) ~ 345 Mb | Mp3 (CBR320) ~ 180 Mb | Scans included
Genre: Classical | Label: Hyperion | # CDA67088 | Time: 01:17:58
The viol consort was introduced to England in the early sixteenth century and was mainstay of domestic music until the middle of the seventeenth century. After the Restoration of Charles II to the throne in 1660, things rapidly changed with the rise in popularity of the violin amongst court musical lfe and amateurs. Composers soon ceased to contribute to the viol consort repertory, with some of Purcell's contemporaries such as Roger North regretting the change. North acknowledged that the violin was 'very excellent in it's kind', but thought that the 'noble Base Viol' embodied all its 'sublimitys'. As North recognised, the viol was not entirely supplanted by the violin in the Restoration period. The bass viol remained in use as a continuo instrument in chamber music until the early eighteenth century, and the instrument acquired a new repertory of solos, duet and trios with continuo. This recording is a survey of this little-known but rewarding repertory.
Arcangelo Corelli MP3 320 CBR Classical 90s George Frideric Handel Gottfried Finger Mark Caudle Lossless The Parley of Instruments Baroque Henry Purcell
Details
Publication archive