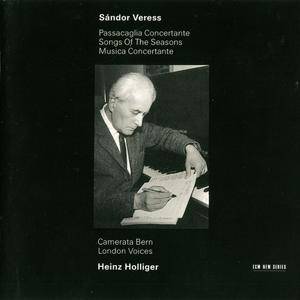 Hungarian-born Sándor Veress (1907-1992) is a sadly neglected figure in modern music. Despite his pupilage under Bela Bartók and Zoltán Kodály, and even his succession over the latter as professor of composition at the Budapest School of Music in 1943, Veress has never attained the same international recognition as his two most successful compatriots. One might blame his preference for solitude or his idiomatic methodology for keeping him in obscurity. Yet as one who made the most of his outlier status and ideological exile, he seems never to have been one to wallow in self-pity. Exposed to much of the folk music that also captivated his mentors, Veress nurtured that same spirit when sociopolitical upheaval exacerbated his emigration to Switzlerland in 1949. Whereas Kodály in particular saw cultural preservation as central to the musical act, Veress saw it as an incision to be teased open and unraveled. 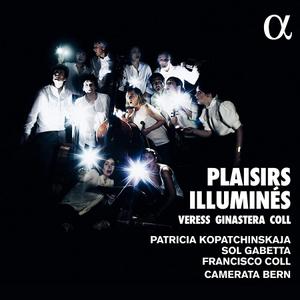 This recording presents the double concerto for violin, cello and orchestra of the Spanish composer Francisco Coll, born in 1985. Les Plaisirs Illuminés, a title inspired by Dalí’s painting of the same name, is rooted in Spanish traditions, including flamenco, yet is resolutely modern: ‘Its music is very lively rhythmically, it dances and sings – but at the same time it is very abrupt, always in search of extremes’, says Patricia Kopatchinskaja. For this world premiere conducted by the composer, she is reunited with a longstanding partner who pursues an equally brilliant international career, the cellist Sol Gabetta.