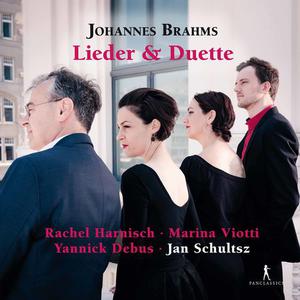 Johannes Brahms wrote well over 300 lieder, including his arrangements of German folk songs, partsongs and choral lieder. Considering how long he carried a song around in his head before writing and publishing the final version, this is an astonishing amount. This 2-CD-set presents a selection from Brahms huge lied repertoire, which not only gives an impression of his importance to music history up to the present day and what a perfect lied composer he was, but also reveals what a cheerful, young-at-heart and humorous person he must have been. The selection of songs and duets is arranged chronologically (1853-1896) and includes all phases of his life in which the lied played a central role, thus allowing the development of the German-language song in the time after Beethoven, Schubert and Schumann to be clearly traced. The pianist Jan Schultsz plays on a wonderful original J.B. Streicher fortepiano from 1871, a model on which Brahms also preferred to play. The singers are Rachel Harnisch (soprano), Marina Viotti (mezzo-soprano) and Yannick Debus (baritone) - young singers who have already celebrated successes in concert and in major opera houses. Schubert's publisher Tobias Haslinger published fourteen songs under the title "Schwanengesang" one year after the composer’s death. Schubert had written them down in rapid succession shortly before his death, which indicates that they were partly conceived as a song cycle.The German bass-baritone Hanno Müller-Brachmann was a member of the ensemble of the Berlin State Opera from 1998 until 2011 and has also appeared at the Bayerische, Hamburgische and Wiener Staatsoper and San Francisco Opera. He has sung with the London, Vienna and Berlin Philharmonic Orchestras, the Berlin and Dresden Staatskapelle, Orchestra National de France, and the Boston, Chicago and Los Angeles Symphony Orchestras under conductors including Thielemann, Haitink, Barenboim, Welser-Möst, Harnoncourt, Luisi, von Dohnányi, Nelsons and Gardiner. Hanno. In addition to concert and opera, Hanno Müller-Brachmann has a great passion for the Lied. He has given recitals in Berlin, Graz, Amsterdam, Hamburg, Paris and Lausanne, at London’s Wigmore Hall, the Schwarzenberg Schubertiade, Berlin Festwochen and the Edinburgh Festival, among others. 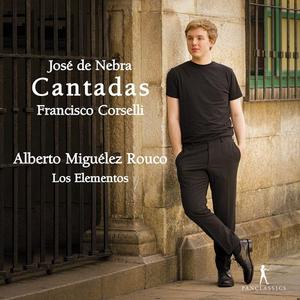 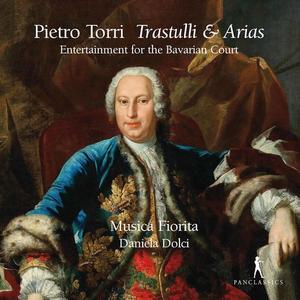 Cristina Grifone, Musica Fiorita, Daniela Dolci - Torri: Trastulli & Arias - Entertainment for the Bavarian Court (2021)
FLAC tracks / MP3 320 kbps | 1:17:14 | 392 / 177 Mb
Genre: Classical / Label: Pan Classics
Pietro Torri's (1650-1737) life and work are closely connected with the Bavarian Elector Max Emanuel, whom he served for almost half a century. The monarch loved a pompous court with elaborately staged operas and festive cantatas. Torri provided the music, composing almost 20 operas and a large number of sacred and secular works for the Bavarian court, making Munich one of the great musical centers north of the Alps alongside Vienna. A special feature of Torri's oeuvre are his Trastulli (literally: time-wasting, playfulness) - a collection of 60 Italian arias with partly obligatory virtuoso instrumental interludes for evening entertainment in private court circles.
Daniela Dolci has compiled a selection of Trastulli into a pastiche and combined it with virtuoso opera arias by Torri. The program gives a wonderful insight into the work of the opera and vocal composer Pietro Torri.
2020 2021 Pan Classics Classical Classical Music Compilation Various Artists FLAC Lossless MP3 Symphonies Any live Baroque Romantic
Details 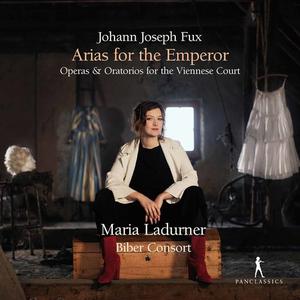 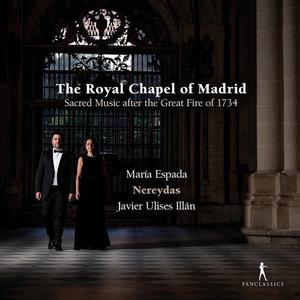 Javier Ulises Illán, Nereydas, María Espada - The Royal Chapel of Madrid: Sacred Music After the Great Fire of 1734 (2021)
FLAC tracks / MP3 320 kbps | 1:13:21 | 168 / 347 Mb
Genre: Classical / Label: Pan Classics
In the history of Spanish monarchy, the Royal Chapel is a fundamental entity for the establishment and dissemination of political and religious doctrine. It constitutes the heart of religious life centered around the kings. In the Royal Chapel, liturgical music plays an essential role as a means of legitimation of the catholic monarchy´s divine origin. In the 18th century, the life of the Spanish court was affected by the fire that razed the Real Alcazar on Christmas Eve of 1734, which also meant the destruction of the musical archive.The then maestro de música Francesco Corselli (1705-1778) had to face the challenge of reconstituting the archive and to provide the music needed for the celebration of liturgical functions, along with other musicians belonging to the institution. With this recording, music that was formerly exclusively intended for royalty is uncovered for the first time.
Classical MP3 320 CBR Easy Listening Classical Music Language neutral 2020 MP3 FLAC Pan Classics Any Lossless 2021
Details 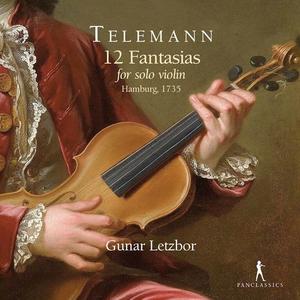 Gunar Letzbor - Telemann: 12 Fantasias for Solo Violin, TWV 40:14-25 (2021)
FLAC tracks / MP3 320 kbps | 01:11:56 | 343 / 167 Mb
Genre: Classical / Label: Pan Classics
Alongside his success directing the ensemble Ars Antiqua Austria, Gunar Letzbor has not let up on demonstrating his talents as a violinist. After the recording of Johann Sebastian Bach’s Sonatas and Partitas the 12 Fantasias by Georg Philipp Telemann present him again completely “a solo”. Telemann’s Fantasias for Solo Violin are reflections both of his full maturity as a composer and of being highly proficient violinist himself, with the exceptionally prolific and enormously busy composer publishing sets of fantasias for solo instruments – flute, viola da gamba as well as violin – without basso continuo in Hamburg in the 1730s. The 12 Fantasias recorded here are written for an unaccompanied instrument and manage to embrace both the long established style for polyphony in German violin music – with fugues and multi-part writing for the violin – and more modern trends – galanterien and Italian sonata and concerto influences. Gunar Letzbor plays a Sebastian Klotz violin from the eighteenth century.
Classical MP3 320 CBR Easy Listening Classical Music Language neutral 2020 MP3 FLAC Pan Classics Any Lossless 2021
Details 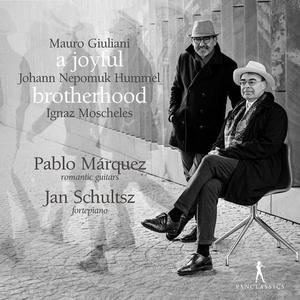 Jan Schultsz, Pablo Marquez - A Joyful Brotherhood (2021)
FLAC tracks / MP3 320 kbps | 1:13:46 | 254 / 168 Mb
Genre: Classical / Label: Pan Classics
This recording documents a remarkable musical friendship in Vienna at the beginning of the 19th century. Mauro Giuliani (1781-1829), a native of the vicinity of Naples, had come to the capital of the Habsburg Empire at a young age and quickly gained a reputation as a virtuoso guitarist on the Viennese scene. For further projects, he made contact with two of the most famous musicians of his time who also lived in Vienna: the two pianists Johann Nepomuk Hummel (1778-1837) and Ignaz Moscheles (1794 1870). The result of the fruitful collaboration of the three virtuosos are potpourris and duets for guitar and fortepiano that highlighted their unique playing and thrilled the discerning Viennese audience.
Classical MP3 320 CBR Easy Listening Classical Music Language neutral 2020 MP3 FLAC Pan Classics Any Lossless 2021
Details 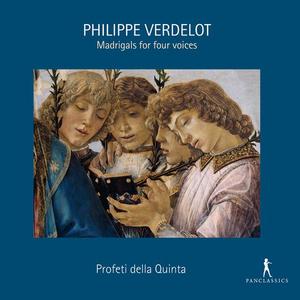 Profeti Della Quinta - Verdelot: Madrigals for 4 Voices (2021)
FLAC tracks | 00:49:05 | 235 Mb
Genre: Classical / Label: Pan Classics
Philippe Verdelot played a very important role in the development of the madrigal during the Italian Renaissance. Born in France, he probably moved to Italy at a young age. From 1522 onwards, he held the most important positions in church music in Florence – first he was maestro di capella at the Baptistery of Florence Cathedral, and a year later also at the Cathedral itself. After 1530, with the riots surrounding the expulsion of the Medici family and the siege of the city, all biographical traces are lost, and no works created after these events seem to have survived.In the years before, however, Verdelot had initiated important musical developments with his madrigals, which at that time were the most published in Italy. The Ensemble Profeti della Quinta presents a selection of four-part madrigals from an anthology published posthumously (1540, 1565). A special feature of their performance is that each singer reads from the originally notated single voice – unlike in a modern score with parts notated one above the other. The musicians must therefore listen to each other much more closely and be able to react spontaneously. This spontaneity can be felt throughout the recording, and takes the listener to the beginnings of the Italian madrigal in a very intense way.
Classical Easy Listening Classical Music Language neutral 2020 2021 FLAC Pan Classics Any Lossless
Details 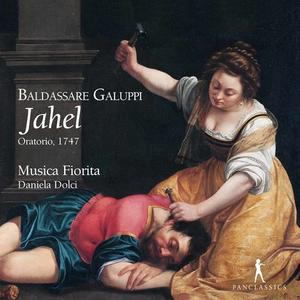 Daniela Dolci, Musica Fiorita - Galuppi: Jahel (2021)
FLAC tracks / MP3 320 kbps | 2:02:09 | 574 / 280 Mb
Genre: Classical / Label: Pan Classics
Venice's four famous orphanages for girls, the Ospedali, were, along with St Mark's Basilica, the musical centers of the city and a European-wide attraction for musicians and travellers. Famous teachers such as Vivaldi, Hasse, Porpora, Legrenzi, Rosenmüller and many others provided the girls with high-quality musical training and programmes of performances.
Baldassare Galuppi, who was central to the development of Italian opera, was maestro di coro at the Ospedale di San Lazzaro dei Mendicanti for twelve years, for which he created the oratorio Jahel in 1747 and performed it there. The oratorio is about the biblical heroine Jahel, whose murder of the army leader Sisara leads to the liberation of Israel. The music is pointed with all its might towards the Viennese classical period, and the experienced Galuppi opera composer can be felt in every note. He wrote the arias for the various soloists of the Ospedale, thus demonstrating the high level of singing that prevailed there.The Musica Fiorita ensemble around harpsichordist Daniela Dolci, together with the Mädchenkantorei Basel and young soloists from the Basel scene, present with Galuppi's Jahel an elaborate repertoire excavation of the first order in exemplary interpretation.
Classical MP3 320 CBR Easy Listening Classical Music Box Sets Language neutral 2020 MP3 FLAC Pan Classics Any Lossless 2021
Details

Silvia Frigato, Ensemble Castor - A Life for the Opera (2021) 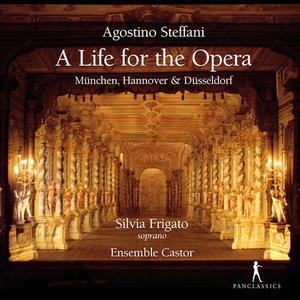 Silvia Frigato, Ensemble Castor - A Life for the Opera (2021)
FLAC tracks | 01:00:34 | 284 Mb
Genre: Classical / Label: Pan Classics
Agostino Steffani is one of those multi-talented personalities one often encounters in the baroque era. He was a man of the church who made it as far as titular bishop and mediator between Pope and Emperor. He was a much-travelled diplomat and politician, as well, who held high state offices up to minister, and he was a composer who wrote operas for the courts in Munich, Hanover and Düsseldorf. The Italian soprano Silvia Frigato and the Castor Ensemble trace the stages of Steffani's life through a selection of arias from his operas.
2020 2021 Pan Classics FLAC Lossless Language neutral Easy Listening Classical Classical Music
Details 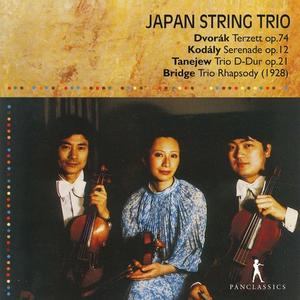 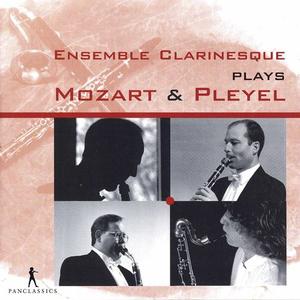 Ensemble Clarinesque - Mozart & Pleyel: Arrangements for Clarinet Quartet (2021)
FLAC tracks | 1:13:44 | 293 Mb
Genre: Classical / Label: Pan Classics
The quartet received a special honour when, in 1998, it became the first German clarinet quartet to be invited to a concert at the world's largest clarinet Congress, the Clarinet Festival of the International Clarinet Association, in Columbus, Ohio (USA).
With a Repertoire that spans the last 4 centuries, the ENSEMBLE CLARINESQUE convinces in its concerts with a successful synthesis of seriousness, Humor and rousing joy in playing.The use of up to 12 different clarinets is unique - from the small Piccolo clarinet to the huge double bass clarinet.This creates concerts that not only inspire through stylistic and tonal diversity, but also represent a fascination for the eye.
Classical Easy Listening Classical Music 2020 2021 FLAC Pan Classics Lossless
Details
Publication archive