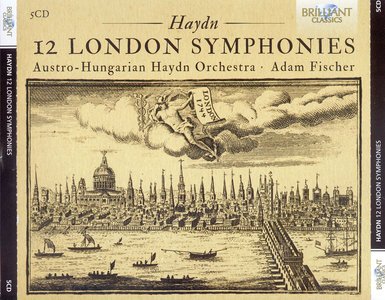 Joseph Haydn, often referred to as 'The Father of the Symphony', has an enormous 109 of these works to his name. Within his vast oeuvre of symphonies is a group of 12, written between 1781 and 1795, which are known as the 'London' symphonies, composed during or for his two visits to the English capital. Brimming with inspiration and character, the 'London' symphonies contain many of the legendary moments of Haydn's works, including the drumroll opening of No.103, the ticking of the clock in the Andante of No.101, the jubilant sound of the triangle in the finale of the 'Military', and that arresting interjection of the timpani in the 'Surprise'. This collection brings together these wonderful works, each of which contributed to Haydn's crafting of the symphonic form that would later be taken up by none other than his pupil and friend, Wolfgang Amadeus Mozart. The Austro-Hungarian Haydn Orchestra was formed by Adam Fischer in 1987 with the express purpose of performing the works of the revered composer. 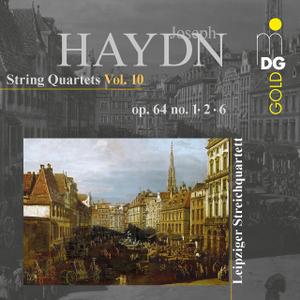 The Leipzig String Quartet is back! After a break of two years the top ensemble from Saxony now continues its Haydn edition. Nos. 1, 2, and 6 round off Haydn’s op. 64 - a marvellous combination of emotional dedication and consummate classicism. Haydn, the glorious inventor of the string quartet, took the genre to new heights in his op. 64. Perfectly balanced in form and harmony, the pieces comprising this number are directly interrelated. In London Haydn’s career once again truly blossomed. The Quartets op. 64 must have played a considerable role in this development, and with the Leipzig String Quartet we immediately understand why this was so. 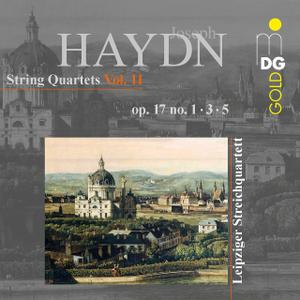 Four Experts it was with this headline that the press welcomed Vol. 10 of the encyclopedic Haydn series by the Leipzig String Quartet. The result is uncommonly rewarding in that as light is shed on a highly interesting developmental advance from divertimento mirth to mature chamber music and straight into the formative years of a revolutionary new musical genre. The Leipzig String Quartet are renowned musicians who have gained universal critical praise for their previous series of Mozart and Beethoven String Quartets. This next volume in their exploration of Haydn't oevre is a welcome addition to the catalogue. 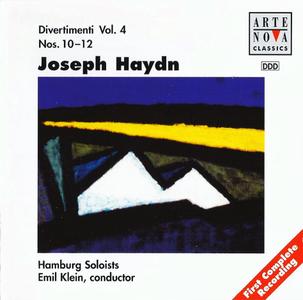 The Penguin Guide (a classical cd review bible) gave this recording three stars, their highest rating. I agree (and was actually suprised to find that they had reviewed it). It has perfect sound and the performance is clean and lively and just-right sounding in terms of pacing and character. These are the earliest works Haydn composed (when he was 25), and they are full of creative melody and unique turns of phrase (and the classical music equivalent of 'hooks'), and also long, beautiful (often minor key) slow movements often reaching to and beyond 9 and 10 minutes in length. 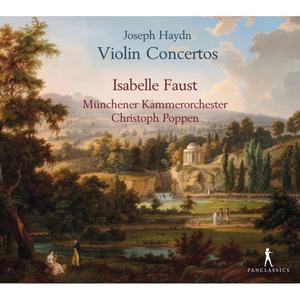 Isabelle Faust is one of the most impressive violinists of the generation that emerged in the 1990s. She is known for exceptional technique and strong interpretive instincts. She performs a wide-ranging repertoire, from J.S Bach all the way through to contemporary composers such as Ligeti, Lachenmann and Widmann. Ever keen to explore new musical horizons, Faust is equally at home as a chamber musician and as a soloist with major orchestras or period ensembles. Over the course of her career, she has regularly performed with world-renowned conductors including Claudio Abbado, Frans Brüggen, Mariss Jansons, Giovanni Antonini, Philippe Herreweghe, Daniel Harding and Bernard Haitink. 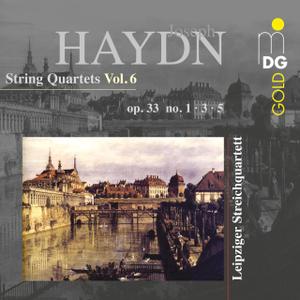 The players of the Leipzig String Quartet come from the veteran ranks of the Leipzig Gewandhaus Orchestra. They have recorded a variety of standard quartet for the German audiophile label MDG, often using an old monastery farmhouse whose sound environment is nothing short of ideal. They are in the midst of a cycle of Haydn quartets that began with some of the more unorthodox items and with volume 6 reaches the Op. 33 quartets, arguably the founding documents of the true High Classical quartet style. The quartet plays on period instruments (and modern replicas of period bows), resulting in a bright sound and precise articulation that doesn't differ sharply from modern-instrument performances. And indeed the performances fall into a long tradition. 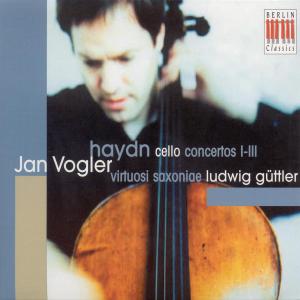 Berlin Classics' 2000 recording of Jan Vogler performing Haydn's cello concertos with Ludwig Güttler and the Virtuosi Saxoniae was first released in 2001 and reappeared in 2009 with a different cover and a lower price, but otherwise unchanged. Vogler's performances are bright and alert, with vivacious allegros and soulful adagios; Güttler's accompaniments are sweet and simpatico; the Virtuosi Saxoniae players live up to their name, and Berlin Classics' digital sound is clear, yet evocative. 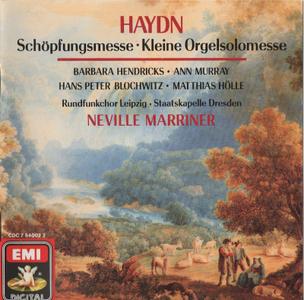 In a conducting career spanning several decades, Sir Neville Marriner has had many great achievements, especially with his own Academy of St. Martin In The Fields, and as music director of the Los Angeles Chamber Orchestra from 1969 to 1978. Another great achievement was the series of recordings he made during the middle and late 1980s with the Dresden State Orchestra for EMI of the later Mass settings of Franz Joseph Haydn, recordings that, alongside similar ones made by Leonard Bernstein, both with the New York Philharmonic in the 1970s and the Bavarian Radio Symphony Orchestra in the 1980s, bought this particular aspect of Haydn's output back into the forefront after having been somewhat obscured by his one hundred four symphonies. 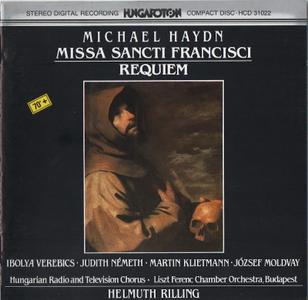 This CD contains a fine performance of the Michael Haydn's Requiem, but if you are interested in hearing the much discussed striking influence of this Requiem on Mozart's, this is not most persuasive performance. For Rilling gives a rather musically suave reading, emphasizing a certain comforting quality to the music, and though you can still make the comparison, there is a better take on that angle. The old Hinreiner recording which was on a Koch/Schwann lp (I don't think it ever made it to CD) is actually much better for suggesting the almost spooky and dusky similarity between the two works. Still, this one is very heartfelt and enjoyable. But the much more spectacular event on this CD is the St. Francis Mass of Michael Haydn. 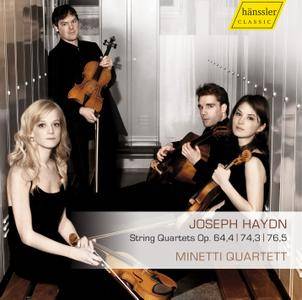 This warmly recorded, naturally balanced disc is delightful. The Minetti Quartet offers three late Haydn masterpieces, played with plenty of high spirits and, in the slow movements, a fresh songfulness (both Opp. 64's and 76's are marked "cantabile") that's most affecting. There's practically nothing to criticize here. Highlights include the really zippy final prestos of Opp. 64 and 76, and the intense Largo assai of the "Rider" quartet. In the finale of the latter, the group's articulation is a touch clipped in the main theme, and as a result the music doesn't quite speak as it should, but better too much energy than too little. The minuet (really a scherzo) of Op. 76 also is terrific, smooth as silk until Haydn's disruptive syncopation sets in. If you're looking for a very attractive single-disc collection of late Haydn quartets, I can recommend this without hesitation. Playing time is a bit short–under an hour–so there was still room for another full quartet, but if this doesn't concern you terribly, then go for it. 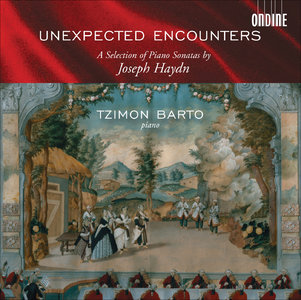 Tzimon Barto - Joseph Haydn: Piano Sonatas Nos. 10, 38, 42, 60 (2009)
EAC | FLAC | Image (Cue&Log) ~ 259 Mb | Scans included
Genre: Classical | Label: Ondine | # ODE 1154-2 | Time: 01:17:21
Released in the 200th anniversary year of Haydn’s death, this new release features pianist Tzimon Barto playing a selection of the great Classical composer’s piano sonatas. Tzimon Barto is celebrated for his "refreshing" approach (American Record Guide) to known repertoire. Barto’s highly personal approach to these works – which he has devoted himself to for much of his career – enables the listeners to make their own "unexpected encounters" with these works. Making no attempt to be "historically correct", Barto focuses instead on his discovery of impressionistic elements, as well as inspiration drawn from theatre and painting of the period. Tzimon Barto is recognised as one of the most radiant and unique personalities in the music world. His two previous recordings for Ondine – keyboard pieces by Rameau (ODE1067-2) and piano works by Ravel (ODE10952) – have received high levels of acclaim; critics have hailed Barto’s musical maturity, superb technique, and endless colour palette.
Viennese School Joseph Haydn Classical Tzimon Barto 2000s Haydn Lossless
Details 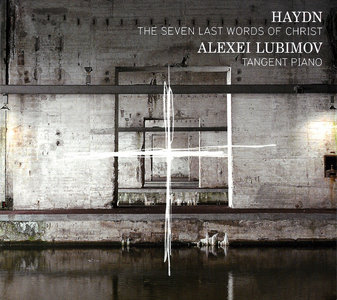 Although it is played on a period instrument, no one is arguing that this recording of Haydn's The Seven Last Words of Christ is historically authentic. The work, exceptionally in Haydn's output, exists in multiple versions, for orchestra, string quartet, chorus, and keyboard (either fortepiano or harpsichord). But surely Haydn did not have the instrument heard here, the rare tangent piano, in his head. This was, speaking roughly, a piano-harpsichord hybrid that never really found its footing in the late 18th century. As long as listeners are down with the idea of a fairly speculative recording, the effect of the tangent piano in this particular work is electrifying. Lubimov gets the best of both worlds: the intimacy of the keyboard version and the dynamic contrasts and timbral shadings of the orchestral original. The keyboard transcription is not by Haydn himself but was made in his own time, and he approved it. Lubimov works from this, tweaking it and adding contrasts that break up the seven consecutive slow movements and give them an extraordinarily expressive quality. 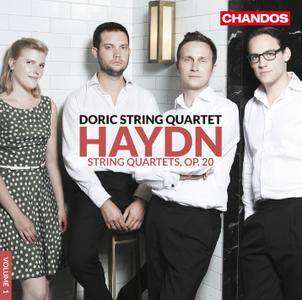 Haydn’s six Op. 20 string quartets are milestones in the history of the genre. He wrote them in 1772 for performance by his colleagues at the Esterházy court and, unusually, not specifically for publication. Each one is a unique masterpiece and the set introduces compositional techniques that radically transformed the genre and shaped it for centuries to come. Haydn overturns conventional instrumental roles, crafts remarkably original colours and textures, and unlocks new expressive possibilities in these works which were crucial in establishing the reputation of purely instrumental music. The range within the quartets is kaleidoscopic. From the introspective, chorale-like slow movement of No. 1 via the terse and radical quartet No. 3 in G minor to the comic spirit of the fourth in D major, each of the quartets inhabits a distinct musical world. For many, this is some of the greatest music Haydn ever wrote. Playing these seminal works is one of the world’s finest young ensembles, the Doric String Quartet. 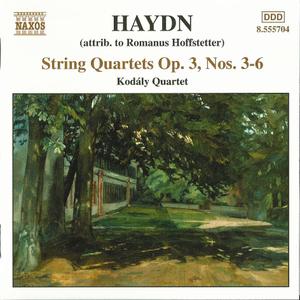 When these quartets were recorded, the Kodaly Quartet ("KQ") had been playing together for more than a quarter century. It shows. What is evident on these recordings is the perfect cohesion of these highly talented musicians; they clearly have an intimate knowledge of the score of each quartet and thoroughly enjoy playing together. The KQ's performance is fresh, truly conveys their love for this music, and fully brings to life the range of emotions contained in this musical microcosm - playfulness, elegance, sunny joy, and gentle reverie - with every movement of these quartets having a quality of refinement and graciousness that allows the listener to savor every note. 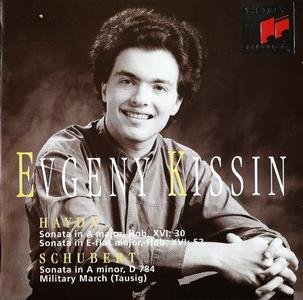 Kissin still looks very much the boy in the cover photo of this 1994 recital, one of the earliest follow-ups to his rapturously received Chopin recitals, also on RCA. He is jsut as phenomenal here. His commanding technique is reined in for the two Haydn sonatas, yet he presses just enough on the classical line to make it sound more vibrant and enticing. Richter made a great specialty of the Schubert A minor Sonata D. 784, yet Kissin steps up with his own less haunted, more heroic interpretation–it works extremely well. Both pianists rescue Schubert from his cliched role as a lyrical innocent, revealing his underlying Beethovenian aspirations.