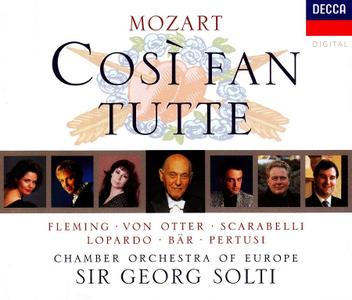 It is more than twenty years since Solti last recorded Così for Decca, and if that earlier version was far from ideally cast, this new one more than makes amends. Above all, it has a commanding Fiordiligi in Renée Fleming, who conveys all the tragic vulnerability of this central character. Her performance of the great second-act rondo ‘Per pietà’ would be enough to melt the hardest of hearts. Anne Sofie von Otter and Olaf Bär are in fine form, too; and while Adelina Scarabelli is not exactly a mistress of disguises (she scarcely alters her voice at all for Despina’s part as the mesmeric doctor), her vitality is irresistible.