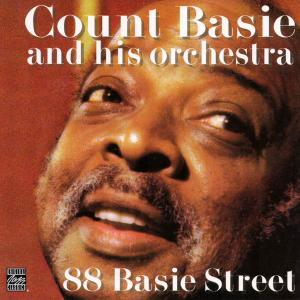 One of Basie's final albums, the very appealing title cut seems to sum up his career, a lightly swinging groove with a strong melody. Two small-group performances with guest Joe Pass on guitar and the tenor of Kenny Hing add variety to a particularly strong set. 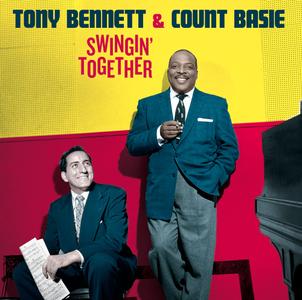 “Bennett’s ability to straddle jazz and popular music was one he shared with few others. He managed to retain more of a jazz feel than either, and that’sN what Basie senses in him: a kindred spirit who is devoted to the not so very taxing business of s(w)inging the song with minimum distraction.” 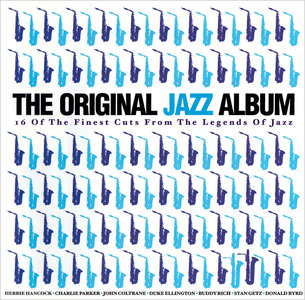 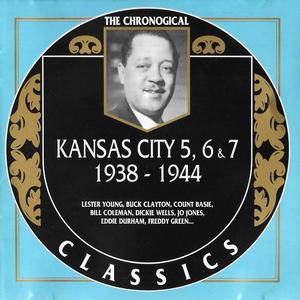 Unlike Duke Ellington's sideman, who often recorded under their own names in the 30s and early 40s, the stars of the Count Basie orchestra had few similar opportunities. However, many of Basie’s best musicians did grace small-group sessions led by Teddy Wilson, Billie Holiday and Lionel Hampton, all of which are available on Classics. The present CD collates four informal studio encounters featuring the Basie alumni, a series of sessions never previously issued together on one CD. 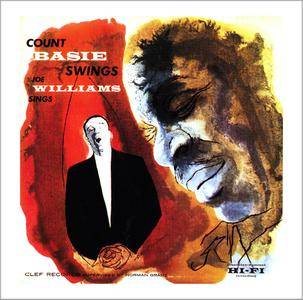 Joe Williams' debut as the featured vocalist in Count Basie's band was one of those landmark moments that even savvy observers don't fully appreciate when it occurs, then realize years later how momentous an event they witnessed. Williams brought a different presence to the great Basie orchestra than the one Jimmy Rushing provided; he couldn't shout like Rushing, but he was more effective on romantic and sentimental material, while he was almost as spectacular on surging blues, up-tempo wailers, and stomping standards. Basie's band maintained an incredible groove behind Williams, who moved from authoritative statements on "Every Day I Have the Blues" and "Please Send Me Someone to Love" to brisk workouts on "Roll 'Em Pete" and his definitive hit, "All Right, OK, You Win". 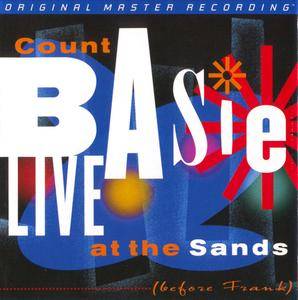 Count Basie - Live at the Sands (Before Frank) (1998) [MFSL Remastered 2013]
EAC | FLAC | Tracks (Cue&Log) ~ 323 Mb | Mp3 (CBR320) ~ 135 Mb | Scans included
Jazz, Big Band, Swing | Label: Mobile Fidelity Sound Lab | # UDSACD 2113 | 00:53:03
Count Basie and Frank Sinatra had the perfect arrangement at the Sands. Before the Chairman hit the stage in Vegas, Count Basie and his big band warmed up the already enthusiastic crowd with a brief set of their own. A dynamite entertainer, the legendary leader causes hearts to race, hips to shake, and fingers to snap with high-energy readings of his trademark swing music, taken to feverish heights by both his first-rate orchestra and the incredibly swank setting. Fortunately, the finest of Basie and Co.’s introductory performances from the historic 1966 dates have been preserved here and serve as a seminal complement to Sinatra’s iconic Live at the Sands. Mastered from the original master tapes, our hybrid SACD version of Live at the Sands (Before Frank) gives you a dead-center, eighth-row seat at the famed Sin City club. You’ll just need to supply your own table and cocktail. Renowned for its sonic clarity, transparency, crispness, and punch, the record is now tremendously enhanced, with improved tonality, a deeper soundstage, correct balances, and lifelike presence.
90s Classic Jazz Count Basie Jazz MP3 320 CBR CD-Rip + Scans Big Band MP3 FLAC Swing MFSL 2013 Lossless
Details 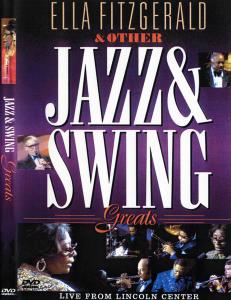 One amazing night in 1972, the greats of swing - Ella Fitzgerald, Duke Ellington, Count Basie, and Bennie Goodman - came together at New York's Philharmonic Hall for a jazz blowout. Joined by Dizzy Gillespie, hosted by Doc Severinson (then in his glory years at the helm of NBC's 'Tonight Show' band), these jazz pioneers reveled in the numbers with which they had changed the face of popular music more than thirty years before. 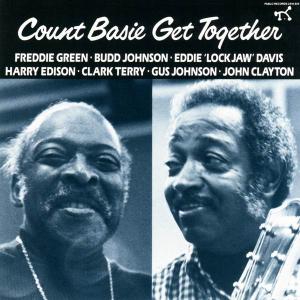 This typically enjoyable Basie all-star jam is particularly noteworhty because it includes the great (but underrated) tenor of Budd Johnson along with Eddie "Lockjaw" Davis and trumpeters Clark Terry and Harry "Sweets" Edison. The music is quite delightful, topped by a fine ballad medley. 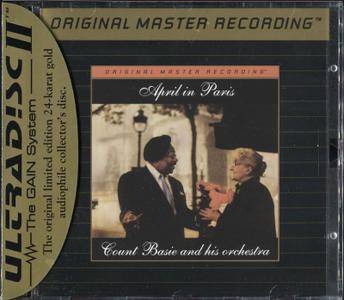 One of the staples in the Count Basie discography, April in Paris is one of those rare albums that makes its mark as an almost instant classic in the jazz pantheon. April in Paris represents the reassembly of the original Count Basie orchestra that define swing in the 1930s and 1940… 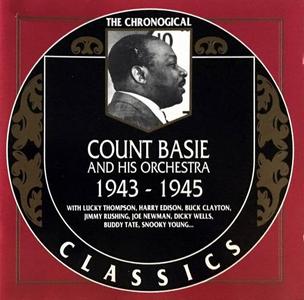 This interesting CD mostly reissues the V-Discs of Count Basie's Orchestra, performed during a time when the musicians' union strike kept the Basie band off records. Lester Young is heard back with Basie on five numbers from May 27, 1944. Otherwise, the band was much more stable than most swing bands of the war years, making it to December 1944 when it was able to resume its recordings for the Columbia label. There was not much change in the orchestra's swinging style during this era, as can be heard on such enjoyable pieces as "G.I. Stomp," "Yeah Man!," "Circus in Rhythm," two versions of "Taps Miller," and "Old Manuscript." 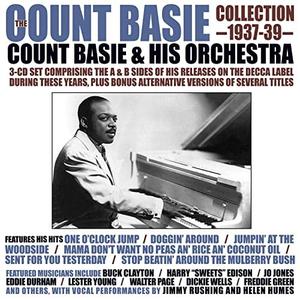 Count Basie & His Orchestra - The Count Basie Collection 1937-39 (2021)
FLAC tracks | 03:05:30 | 489 Mb
Genre: Jazz / Label: Acrobat Records
William “Count” Basie was one of the most important, innovative and influential personalities in jazz during the middle decades of the 20th century, both as pianist, composer and bandleader, his music transcending the worlds of small group jazz, big band music, swing and R&B, and with many future stars of the genre coming to prominence playing with his orchestra. Having honed his skills with Bennie Moten’s band in Kansas City, he formed his own orchestra in 1936 after Moten’s death and after a lengthy engagement in Chicago signed to Decca, recording for them until almost the end of the decade. This 63-track 3-CD set comprises his releases for Decca during those years, which laid down a marker as to the talent and style of his bands, and constitute a significant and satisfying body of work. The collection features many of his well-known compositions like “One O’Clock Jump”, “Blue And Sentimental”, Blues In The Dark”, along with some of the classic standards of the era. A number of the tracks feature vocals by the great singers Jimmy Rushing and Helen Humes, and among the predominantly big band recordings are some by Basie with a trio comprising Fred Green, Walter Page and Jo Jones. Among the other musicians in his line-up were Buck Clayton, Lester Young, Harry Edison and Dickie Wells. It’s a substantial, thorough and enlightening overview of this key era of Basie’s career.
Classic Jazz Oldies Count Basie Jazz Vocal Jazz Pop Easy Listening Box Sets Big Band 2020 2021 FLAC Swing Blues Any Lossless
Details 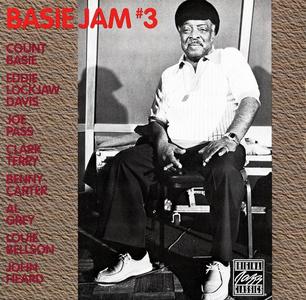 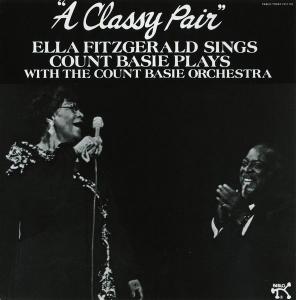 This studio album matches together Ella Fitzgerald and the Count Basie Orchestra 16 years after they first recorded together. Basie's sidemen are unfortunately restricted in the Benny Carter arrangements to backup work but Basie has a few piano solos and Fitzgerald is in good voice and in typically swinging form. Highlights include "Just a Sittin' and a Rockin'," "Teach Me Tonight" and "Honeysuckle Rose." 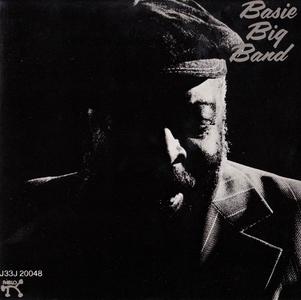 The Count Basie Orchestra's initial studio album for Pablo mostly features pleasant but lightweight arrangements by Sammy Nestico. The music is quite recognizable as Basie's but the results are somewhat forgettable and predictable. 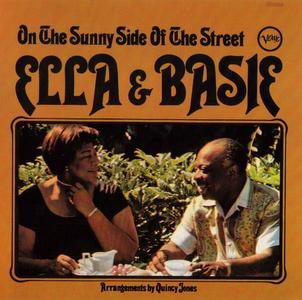 Surprisingly enough this 1963 LP was the first time (other than a couple songs) that Ella Fitzgerald and Count Basie recorded together. (The match-up was so logical that it would be repeated many times over the next 20 years.) Fitzgerald sounds fine and, even if Quincy Jones' arrangements did not give the Basie musicians as much space for solos - although two songs do feature a bit of trumpeter Joe Newman, trombonist Urbie Green and Frank Foster on tenor - this is an enjoyable effort. High points include "Honeysuckle Rose," "Them There Eyes" and "Shiny Stockings."
It was originally issued as "Ella & Basie!" and reissued later with slightly different cover art as "On the Sunny Side of the Street".