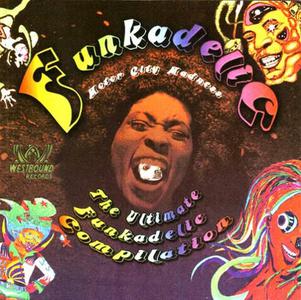 Well you know what they say about stupid questions? So we'll ignore that and tell you instead what's a Funkadelic compilation. Oh yes, 29 tracks - in this case odd is most definitely better than even - of undiluted excessive but somehow beautiful funkiness, courtesy of the seminal Westbound Recordings of George Clinton's funky rock band. George's biggest hits might have come towards the end of the 70s on Warner Brothers, and in the early 80s on Capitol, but he defined what he was all about at the Detroit label in the early to mid 70s. He recorded a series of albums that took rock, soul and funk, blended them with a self mythologizing, drug-fuelled aura, and came out with one of the most influential catalogues in rock'n'roll. 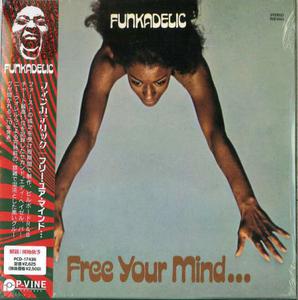 Free Your Mind…And Your Ass Will Follow Review by Ned Raggett
It's one of the best titles in modern musical history, for song and for album, and as a call to arms mentally and physically the promise of funk was never so perfectly stated. If it were just a title then there'd be little more to say, but happily, Free Your Mind lives up to it throughout as another example of Funkadelic getting busy and taking everyone with it. The title track itself kicks things off with rumbling industrial noises and space alien sound effects, before a call-and-response chant between deep and chirpy voices brings the concept to full life. As the response voices say, "The kingdom of heaven is within!" The low and dirty groove rumbles along for ten minutes of dark fun, with Bernie Worrell turning in a great keyboard solo toward the end – listening to it, one gets the feeling that if Can were this naturally funky, they'd end up sounding like this. From there the band makes its way through a total of six songs, ranging from the good to astoundingly great. "Funky Dollar Bill" is the other standout track from the proceedings, with a great, throw-it-down chorus and rhythm and a sharp, cutting lyric that's as good to think about as it is to sing out loud. The closing "Eulogy and Light," meanwhile, predates Prince with its backward masking and somewhat altered version of the Lord's Prayer and Psalm 23. At other points, even if the song is a little more straightforward, there's something worthwhile about it, like the random stereo panning and Eddie Hazel's insane guitar soloing on "I Wanna Know If It's Good for You," with more zoned and stoned keyboard work from Worrell to top things off. The amount of drugs going down for these sessions in particular must have been notable, but the end results make it worthy. 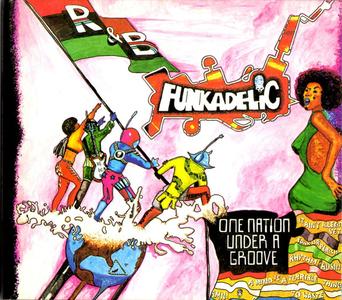 George Clinton's post-bicentennial message to those in the "chocolate cities" was that America could be theirs, too, without any loss of their own black, regional identities. One Nation Under a Groove remains Funkadelic's most provocative release, as well as one of the funkiest long-players released in the disco era. The band vamps on a world where people of different color play each other's songs ("Who Says a Funk Band Can't Play Rock?!"), lose their inhibitions (the classic title track), and bond together with the glue of shared secrets (the wonderful "Groovallegiance"). Standout: the slow-grooved "Into You," in which a lover vows to stay true or a patriot pledges devotion to a new flag–take your pick. You might think that a complex and moving ode to commitment is out of place on an album with such political overtones, but it's not. It's really the quiet-storm centerpiece. –Don Harrison –This text refers to an out-of-print edition of this title. 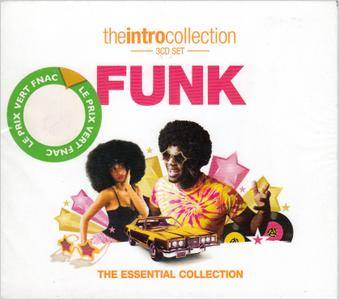 Not released until 1996, this was an unusual gig for the band, which was breaking in a new rhythm section (this may have been this lineup's first show) without much or any rehearsal. You can't tell from this 77-minute disc, which offers a typically amorphous, free-floating set of black rock - which is to say, judged by most standards, it's not typical music at all. Seguing from spaced-out jams to occasional numbers with vocals by George Clinton, and throwing in imaginative improvisations by guitarist Eddie Hazel and keyboardist Bernie Worrell, it sounds something like a combination of Jimi Hendrix, James Brown, and Sun Ra. The 14-minute "Maggot Brain" verges on prog rock/psychedelia (in the good sense), with its almost mystical guitar lines; earthier pleasures are offered with cuts like "I Call My Baby Pussycat" (two versions)… 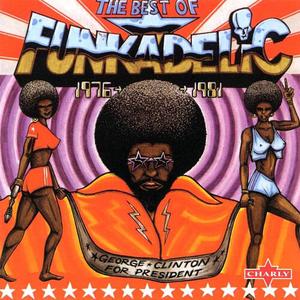 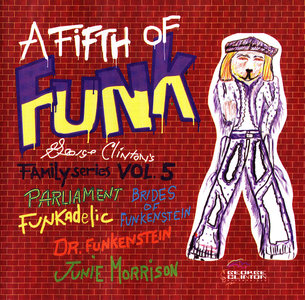 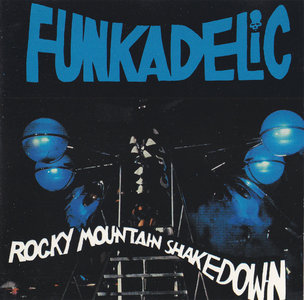 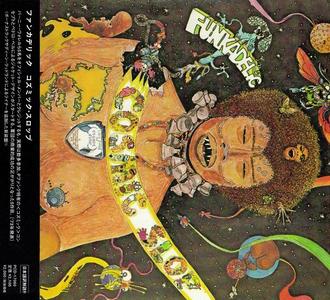 With a much more stripped-down version of the band, if the credits are to be believed (five regular members total, not counting any vocalists), Funkadelic continued its way through life with Cosmic Slop. A slightly more scattershot album than the group's other early efforts, with generally short tracks (only two break the five-minute barrier) and some go-nowhere ballads, Cosmic Slop still has plenty to like about it, not least because of the monstrous title track. A bitter, heartbreaking portrait of a family on the edge, made all the more haunting and sad by the sweet vocal work - imagine an even more mournful "Papa Was a Rollin' Stone" - the chorus is a killer, with the devil invited to the dance while the band collectively fires up the funk… 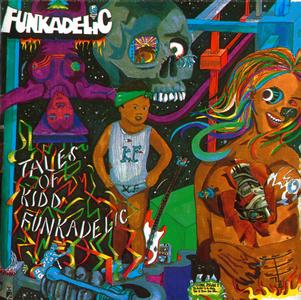 Funkadelic - Tales Of Kidd Funkadelic (1976)
EAC | FLAC | Tracks (Cue&Log) ~ 255 Mb | Mp3 (CBR320) ~ 92 Mb | Scans ~ 118 Mb
Funk, Psychedelic, Funk-Rock | Label: Westbound | # CDSEW 054 | Time: 00:39:53
Tales of Kidd Funkadelic is the eighth studio album by the band Funkadelic, released in September 1976 on the Westbound record label. It was actually released after Funkadelic had left the label, in order to capitalize on Funkadelic's new-found fame. The tracks were outtakes recorded around the same time as Hardcore Jollies and given to Westbound by George Clinton as a contractual obligation. The tracks were belatedly thrown together by Westbound to form another album for release, Tales of Kidd Funkadelic.
Psychedelic MP3 320 CBR Funkadelic Funk-Rock Rock Lossless Garage psychedelic RnB MP3 FLAC 1976 70s Funk
Details 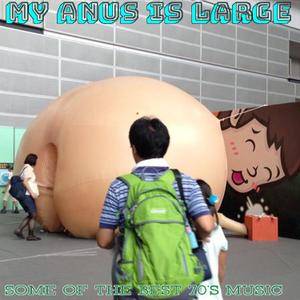 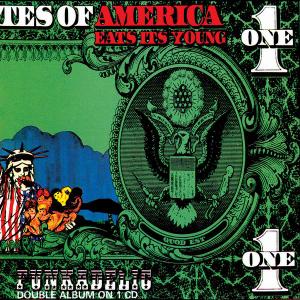 A double album and worth every minute of it, America Eats Its Young makes for a freaky, funky, and aware good time. Compared to the endless slabs of double-album dreck that came out around the same time from all sources, here Funkadelic brought life, soul, and much more to the party. With George Clinton credited only for arranging and producing, here the mad cast he brought together went all out. Bernie Worrell in particular now had a new importance, credited as co-arranger with Clinton as well as handling string and horn charts on a number of songs. His surging, never-stop keyboards, meanwhile, took control from the start, with his magnificent lead break on the opening "You Hit the Nail on the Head" making for one of the best performances ever on Hammond organ… 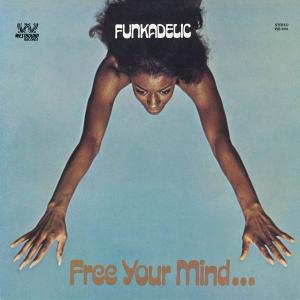 It's one of the best titles in modern musical history, for song and for album, and as a call to arms mentally and physically the promise of funk was never so perfectly stated. If it were just a title then there'd be little more to say, but happily, Free Your Mind lives up to it throughout as another example of Funkadelic getting busy and taking everyone with it. The title track itself kicks things off with rumbling industrial noises and space alien sound effects, before a call-and-response chant between deep and chirpy voices brings the concept to full life. As the response voices say, "The kingdom of heaven is within!"… 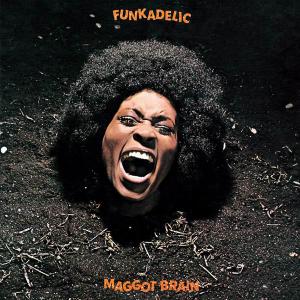 It starts with a crackle of feedback shooting from speaker to speaker and a voice intoning, "Mother Earth is pregnant for the third time, for y'all have knocked her up" and talking about rising "above it all or drown in my own sh*t." This could only have been utterly bizarre back in 1971 and it's no less so decades later; though the Mothership was well on its way already, Maggot Brain really helped it take off. The instrumental title track is the key reason to listen, specifically for Eddie Hazel's lengthy, mind-melting solo. George Clinton famously told Hazel to play "like your momma had just died," and the resulting evocation of melancholy and sorrow doesn't merely rival Jimi Hendrix's work, but arguably bests a lot of it…