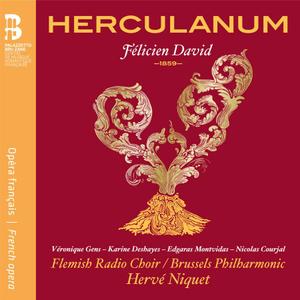 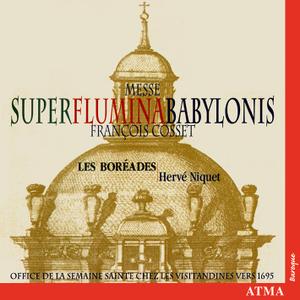 François Cosset (c. 1610-1664) composed a proportion of his music for performance in a convent. It is therefore scored for high voices, and this includes the present work - a polyphonic Missa Super flumina Babylonis for six high voices and small complement of period instruments. Interspersed among the Mass movements here are a number of ‘petits motets’ by Lully and others, also for soprano voices, along with a few instrumental pieces. 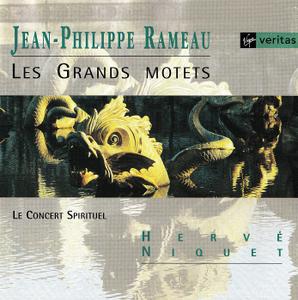 … Niquet casts the three surviving grands motets from strength, with the likes of Stephan Imbodem and Véronique Gens among his other soloists. His conducting is alert, rhythmically buoyant, and attentive to both musical and word values, as the multi-tempo hurdles of “Converte, Domine” show. Details are never lost, but neither is momentum. The choral and orchestral work of Le Concert Spirituel is first-rate, with a precision that doesn’t rule out a refined color palette. 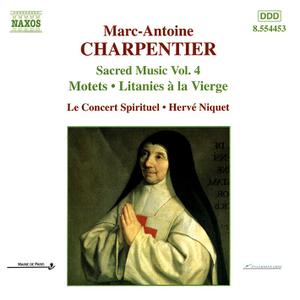 Charpentier here offers elegant and intimate music that ranges from the delicate to the exuberant, the lyrical, and the dramatic. Most if not all of these pieces were probably written for the musical establishment of the Duchess of Guise, who was Charpentiers patron from 1670 until her death in 1688. The performing forces on this recording consist of five singes, two obligato violins and a continuo ensemble with theorbos the most prominent harmony instruments. While some of he music could conceivably be performed with larger forces, the chamber-like scale of these readings suites the character of the music admirably. Both texts and music suggest private household devotion rather than public liturgy. Texts range from the traditional seasonal Marian Antiphons to anonymous Latin devotional poetry of the Counter-Reformation. 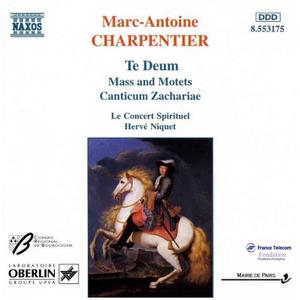 The Canticum Zachariae dates from 1687, and its lovely six-part Benedictus shows Charpentier in characteristically fluent lyrical and contrapuntal form. The four-part Mass—the first of the composer’s eleven settings—which opens simply, extends to six voices in the Sanctus, with the spirited Hosanna extended to double choir. But it is the short Agnus Dei, serenely beautiful, that haunts the memory. 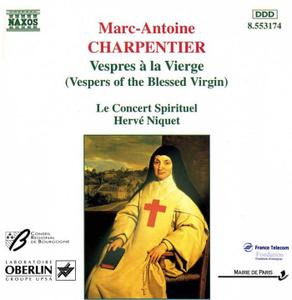 On his return from Italy in the late 1660s, Charpentier entered the service of Mademoiselle de Guise. Until 1687-88 he was one of a group of some fifteen players and singers of such quality that it was said that it excelled even those of great kings. On the death of Mademoiselle de Guise in 1688, Charpentier became maître de musique of the College of Louis-le-Grand, then of the Jesuit Church of St. Louis. Finally, on 28th June 1698, he was appointed choir-master of the Sainte-Chapelle, a position he held until his death. The most important aspect of Charpentier's work lies in his sacred music. His contribution to the form of the motet is considerable. From the monastery to the church, he composed for the many seasonal religious ceremonies, from the most intimate to the most overtly celebratory. The music of Charpentier draws its substance and originality essentially from his synthesis of the Italian and French styles. 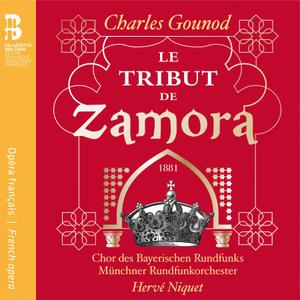 After Polyeucte (1878), Gounod tackled the operatic genre for the last time in 1881 with what is probably his most ambitious work, Le Tribut de Zamora. The action takes place in ninth-century Spain – from Act Two onwards, on ‘a picturesque site on the banks of the Guadalquivir before Córdoba’. Here Gounod – finally noted more for his neoclassical pastiches (Le Médecin malgré lui and Cinq-Mars) and his ardent Romanticism (Faust and Roméo et Juliette) – was given an opportunity to display his talents as an orchestrator and colourist in an exotic setting. He produced an epic in the tradition of French grand opéra, with numerous ensembles and showpiece airs. Despite an unequivocal success on its first run, despite the stirring national anthem ‘Debout! Enfants de l’Ibérie’, Le Tribut de Zamora sank into oblivion within a few short years. We can now appreciate in this opera precisely what certain detractors complained of at the time: the fact that we meet here once again the irresistible lyricism of Faust and Roméo et Juliette. The richness and splendour of French Baroque sacred music, by turns gravely sombre and spectacularly exuberant, have already been amply demonstrated by Hervé Niquet and Le Concert Spirituel through their series of recordings on Glossa of music by Marc-Antoine Charpentier. But it was not just in Paris or in the country’s religious foundations that such involved music-making was called upon, but also in cities such as Troyes and Châlons-sur-Marne where Pierre Bouteiller, maître de musique in cathedrals there during the reign of Louis XIV, composed his Missa pro defunctis, a beautiful setting scored for five voice parts with instrumental accompaniment. 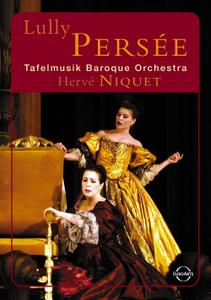 In his position as the king’s composer, Jean Baptiste Lully (1632-1687) created the opera Persée for Louis XIV. The opera was considered the crowning achievement of 17th century French music theatre and was widely recognized as Lully’s greatest work. Filled with dancing, fight scenes, monsters and special effects, this truly spectacular music drama recounts the thrilling story of Perseus, son of Zeus and heroic vanquisher of the snake-haired Gorgon Medusa. More than half a century after its premiere, Louis XV chose “Persée” to open the new Royal Opera House at the Chateau de Versailles, an event that formed part of the celebrations for the future Louis XVI’s marriage to Marie Antoinette.

Niquet’s performances of Charpentier with Le Concert Spirituel are generally characterised by their liveliness. Niquet uses quite small forces, which emphasises the chamber nature of much of Charpentier’s writing, even in his grandest works. Niquet’s version of the Te Deum is one of the bounciest that I have heard. Crisp and lively playing from the instrumentalists emphasises the work’s dance-like qualities in a charming way. The faster sections are taken with remarkable speed and dexterity, but never feel rushed and they contrast admirably with the slower movements.
The choir of just thirteen singers is admirably secure and stylish. Soloists are chosen from the choir (and not named in the booklet, which is a little frustrating) and though they sing with great style, some lack a little focus.
–Robert Hugill

For his latest recording directing Le Concert Spirituel, Hervé Niquet has revived Sémélé by Marin Marais – the final opera by one of the leading composers from the reign of Louis XIV. Known above all for his compositions for the viola da gamba, Marais the composer was at the same time the author of a number of tragédies lyriques which he wrote for the Académie royale de Musique. Even to this day it has only been Alcyone which has attracted the attention of music lovers and musicians. Yet Sémélé – first performed in 1709 – arrives now full of music to charm and seduce the listener: a sparkling prologue honouring Bacchus, a set of arias with a freshly-minted appeal, a marvellously inventive diabolical scene, divertissements rich in character; all this leading up to an earthquake scene memorably anticipating the later work of Rameau. For all lovers of glorious baroque music, here is now the opportunity to discover and enjoy a masterpiece which has lain in theshadows for the last three centuries.