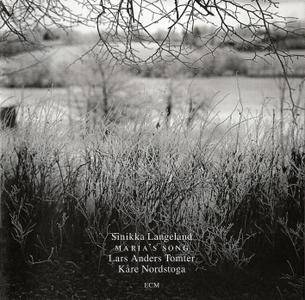 Norwegian folk musician Sinikka Langeland, singer and player of the kantele (the Finnish table harp) is a distinctly non-traditional traditionalist, redefining "folk" in successive projects. 'Maria's Song' finds her in the company of two distinguished classical musicians - organist Kare Nordstoga and "giant of the Nordic viola" Lars Anders Tomter - and on a mission to restore Marian texts to sacred music, weaving folk melodies in between the timeless strains of J S Bach. Langeland made a lot of friends with her sparkling ECM debut Starflowers: "There are jewels everywhere on this arresting example of ego-free music-making. One of the albums of this or any other year" raved the Irish Times. Where Starflowers brought Langeland into the orbit of jazz improvisers, Maria's Song is a meeting and cross referencing of folk and 'classical' energies, and also a righting of historical 'injustice': Religious folk songs are amongst the most distinctive elements of the Norwegian folk tradition, yet the Virgin Mary rarely appears in them.