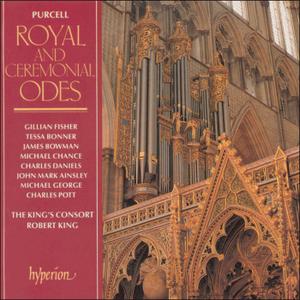 Arise, my muse dates from 1690, the second of six years in which Purcell was commissioned to write an Ode for the birthday of Queen Mary. That year saw a change in the orchestral scoring of Purcell’s Odes, with the addition of wind and brass instruments (other than the pair of recorders that had featured on various previous occasions) to the established string texture. For this work, with an unusually inspired libretto, Purcell added pairs of oboes, recorders and trumpets, and also a second viola to the string section, making possible sounds of great richness. 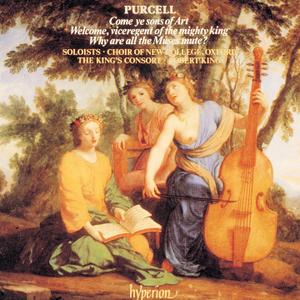 For his 1694 offering to the Queen, Come ye sons of Art, away, Purcell was on sparkling form, and produced an Ode markedly different to the majority of the twenty-two works which had preceded it. The forces utilized were greater than normal, with an orchestra replacing the more usual single strings, and there was a clearly defined role for the chorus. Recent successes on the stage had led to this more expansive style of composition, and the inspired text (probably by Nahum Tate), full of references to music and musical instruments, was one which gave Purcell’s fertile imagination plenty of source material. 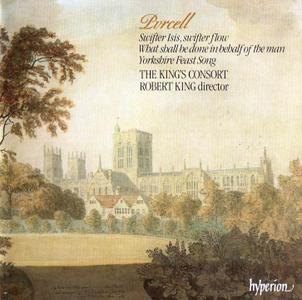 With William and Mary duly crowned there was more topical material available than usual, and the Stewards commissioned the best available author and composer to celebrate in ‘a very splendid Entertainment of all sorts of Vocal and Instrumental Musick’. Thomas D’Urfey included the libretto in his Pills to Purge Melancholy, describing it as ‘An Ode on the Assembly of the Nobility and Gentry of the City and County of York, at the Anniversary Feast, March the 27th, 1690. Set to Musick by Mr. Henry Purcell. One of the finest Compositions he ever made, and cost £100 the performing’. Of old, when heroes thought it base was ostensibly a history of York from Roman times onwards, but it also contained allegories of the Glorious Revolution. Despite D’Urfey’s sometimes contrived text, Purcell responds with music of high quality. 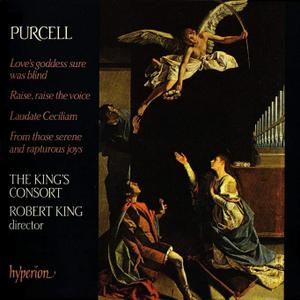 Purcell’s fourth birthday Ode for the Queen, Love’s goddess sure was blind, was the most intimate of the six, scored for just strings and a pair of recorders. The two-section Symphony is one of Purcell’s finest, especially richly scored. The noble, yet wistful, first part is dominated by a six-note falling scale and a ravishing melody (which comes only once in the violins, but three times in the viola), all wrapped in glorious harmony. The triple-time second section at first glance appears lighter in character, but (as with so much of Purcell’s music, which needs to be played to discover its true riches) in practice still has an underlying current of melancholy, heightened at the end as the opening mood returns. 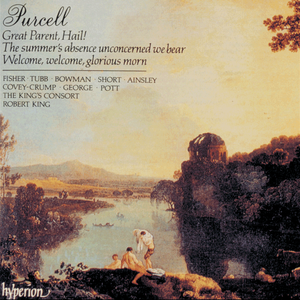 Purcell and the majority of the British public were genuinely fond of Queen Mary, who with William replaced King James on the throne when he fled to the continent. London musicians breathed a collective sigh of relief at the Glorious Revolution and Purcell composed six of his finest Odes to honour his new Queen’s birthday. 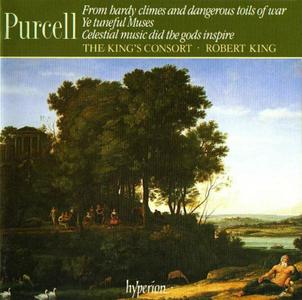 Ye tuneful Muses was written in 1686, most probably to celebrate the return of the Court from Windsor to Whitehall on 1 October. As the birthday of King James II fell on 14 October some scholars have suggested it is possible that the celebrations were combined, for the diarist Luttrell recorded that the birthday was ‘observed with great solemnity … the day concluded with ringing of bells, bonefires and a ball at Court’, but there is little in the text to suggest this was so. That anonymous author did however provide Purcell with a good libretto, full of variety and vivid material for compositional inspiration, especially in its references to music and musical instruments and, as ever, Purcell did not fail. 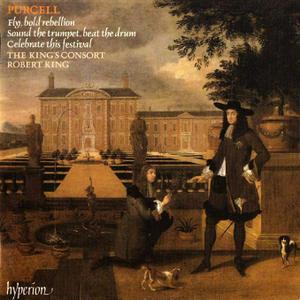 Fly, bold rebellion was one of Purcell’s early Welcome Songs, composed for Charles II in 1683. The manuscript gives no indication of the date of the first performance, but it seems evident from the anonymous author of the words that it was written shortly after the discovery of the Rye House Plot, which took place in June 1683. The Ode thus would seem likely to have been performed to celebrate Charles’s return from Windsor to Whitehall at the end of June, or perhaps later in the year on his return to London from Winchester (25 September) or Newmarket (20 October). After the splendid two-part Symphony, the Ode contains the already established selection of choruses, trios and solos, interspersed with Purcell’s deliciously scored string ritornelli. 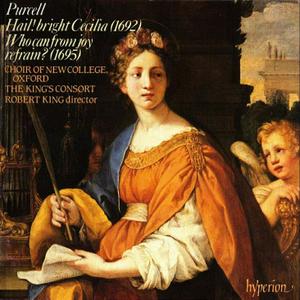 The last, and greatest, of Purcell’s four Odes to St Cecilia, Hail! bright Cecilia was composed to a text by Nicholas Brady in 1692 in honour of the feast day of Saint Cecilia, patron saint of musicians. It is a celebratory work comprising of masterful instrumental sections, majestic choruses, and varied solos, duets and trios. Written in 1695, Who can from joy refrain? was composed as an ode celebrating the Duke of Gloucester’s sixth birthday. Both these works reveal the unparalleled richness of the composer’s musical invention and explain why, more than three hundred years later, Henry Purcell is still regarded as one of Britain’s finest composers. 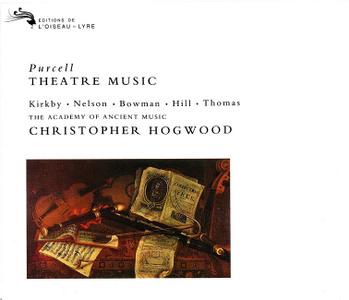 One of the leading experts in early music, Christopher Hogwood, leads the way as you hear the beautiful 17th-century theatre music of British composer Henry Purcell. The Academy of Ancient Music and the Taverner Choir perform Abdelazer; The Married Beau; Bonduca; Circe; Don Quixote; The Double Dealer; The Rival Sisters , and much more! 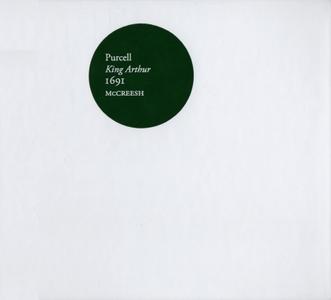 The great patriotic opera of the 17th century, recorded here in a lively new performing edition after two decades in the Gabrieli’s touring repertoire. Notoriously difficult to present on disc or in concert, this version presented by Gabrieli was created to allow an obvious musical narrative, despite Purcell’s music often being completely dislocated from much of the original theatre context. 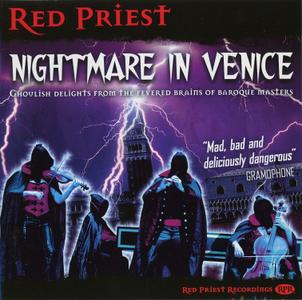 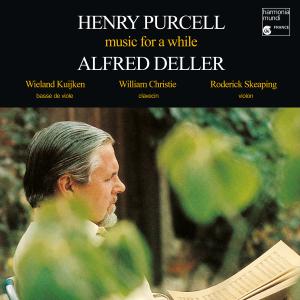 Alfred Deller - Purcell: Music for a while (Remastered) (1979/2019)
WEB FLAC (tracks+booklet) - 212 MB | Tracks: 13 | 49:43 min
Style: Classical | Label: Harmonia Mundi
Alfred Deller tirelessly promoted his core repertoire of Elizabethan lute songs and Purcell throughout his carrer. This recital anthology was recorded at Provence only three months before Deller’s death at Bologna on 16 July 1979. Some of the most familiar songs here, such as ‘Fairest Isle’, were originally conceived as operatic music for soprano voice, but one cannot imagine that Purcell would have minded Deller taking the music out of context, adapting if desirable, and making it his own.
Harmonia Mundi Classical FLAC Lossless 2019 Alfred Deller Purcell
Details 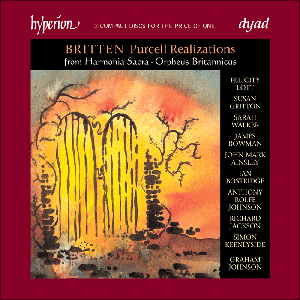 It is more or less axiomatic now that anything Graham Johnson turns his hand to will be perfectly realised, and here it proves once again to be the case. That he is accompanying eight of the finest voices in the young and middle generations of British singers can only have helped. Hyperion supplies full texts and a recorded sound of complete fidelity. These are, moreover, well filled discs. It is plain that nothing short of a strong recommendation will do. 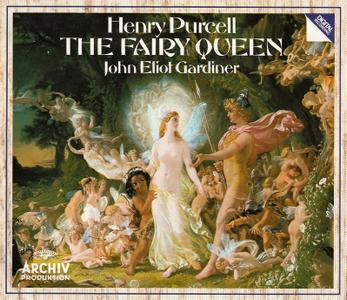 This 1981 recording was the first period-instrument version of Purcell's most famous "semi-opera." This Restoration-era hybrid was a play with a complete (spoken) script plus numerous musical numbers for soloists, chorus, and pit orchestra. The Fairy Queen is based on Shakespeare's A Midsummer Night's Dream, although you'd never know it from the music, which has (typically for the genre) no real connection to the plot. (Most of the songs and dances are masques performed for the entertainment of Titania, Oberon, or Hippolytus.) The advantage to this is that Purcell's score can be performed fairly well on its own. The Fairy Queen includes some of Purcell's best-loved comic scenes ("The Drunken Poet" and "Coridon and Mopsa") and songs ("Hark the echoing Air," "Ye gentle spirits," and "Hark how all things in one sound rejoice"–the last sung here by Jennifer Smith, sounding more beautiful than on any recording she's made since). 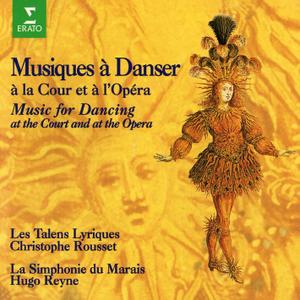 Here is a very special recording devoted to early 18th-century dance music for which we have recently rediscovered choreographies from the period. Such a discovery may well come as a surprise, since it is not generally realised that, long before the proliferation of various 20th-century systems of dance notation, an earlied system had already been invented and them forgotten, only to be rediscovered within the last few years.