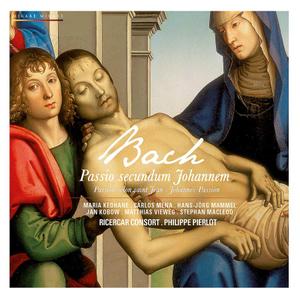 Bach wrote his passion-oratorio during the first year of his assumption of duties in Leipzig. The city fathers were rather strict in their Lutheranism, and forbade anything that remotely smacked of the newly-found opera craze that was infecting the country at the time, and seeped into the passion music of such luminaries like Telemann. As a result Bach was constrained, if such a word can be used, to employing the gospel only as the source of his libretto. Because of this the St. John Passion has perhaps the greatest text of any passion ever written, and Bach was determined to make the piece worthy of the scriptures he was setting. 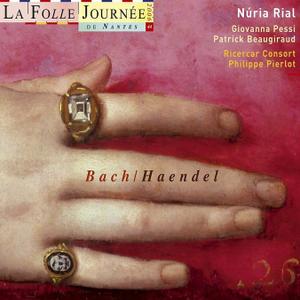 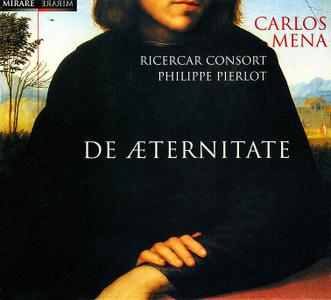 From the beginning of time songs of mourning, sorrow and lamentation have been a part of Western music. Aristotle had written that nothing was more powerful than rhythm and song for imitating all the turmoil of the soul. Composers of the Baroque Period strove to deal with nothingness and eternity by exploring the utter depths of the heart. And this is what these songs are all about.

The Stabat Mater Dolorosa is a sequence, not a chant, and no unified melody was established for it until the mid-nineteenth century; it was even banned for a time by the Council of Trent, but restored to liturgical use in the late 1720s by Pope Benedict XIII. Much as Prohibition did not stem the tide of alcohol use, the Council of Trent's ban on the text did not diminish the popularity of the Stabat Mater. It was during the official, 160-year-long period where the Stabat Mater was not heard in churches that Giovanni Felice Sances composed the title work on this Mirare CD Stabat Mater, featuring Carlos Mena, Philippe Pierlot, and the Ricercar Consort. 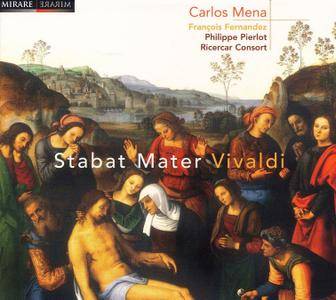 Spanish countertenor Carlos Mena is not one of those who evoke the powerful castrati who might have sung these sacred arias in Vivaldi's day; his voice is smooth and precise, with a tendency toward emotional restraint. This isn't blood-and-guts Vivaldi, but it's quite lovely. Even the final Nisi dominus, RV 608, with its virtuoso arias and sharp contrasts, is kept under control at all times rather than being treated as a set of operatic numbers. Mena is technically flawless in this work (listen to the rather chilling long notes in the "Cum dederit dilectis," track 22), which stands somewhat apart from the rest of the program – the intent is to close the proceedings with a burst of energy after two sad pieces that offer refined tragedy in Mena's readings.

Philippe Pierlot and the Ricercar Consort's 2006 recording of Bach's Magnificat brings back the glory days of historically informed performances, those halcyon days in the 1980s when musicians, empowered by scholarship and energized by virtuosity, were recording the Baroque repertoire with the zeal of the newly converted. Though Pierlot and his musicians are of a younger generation, they bring a missionary fervor to the music, a program of Bach's Magnificat, BWV 243, and Missa Brevis, BWV 235, interspersed with two well-chosen organ works, the Fuga sopra il Magnificat, BWV 733, and the Präludium und Fuga, BWV 541. Pierlot's textures are clean, his rhythms buoyant, his colors bright, and tempos brisk, but not rushed in the fast movements, and contemplative but not moribund in the slow movements.